Full Name
Allyson Felix
Job Title
Olympic Champion and President & Co-founder
Company
Saysh
Speaker Bio
Allyson Felix is the most decorated American Track & Field Olympian of all time after winning her bronze and gold medals at the 2020 Tokyo Olympics - her fifth and final Olympic games. Ms. Felix closes this chapter of her life with a mind-blowing, twenty-seven global medals at the Olympics and World Championships and titles as both a World Record Holder and a Master’s World Record Holder.

Ms. Felix continued to make history in Tokyo by sporting racing spikes created by her company Saysh – becoming the first athlete to race in their own spikes. Launched in June 2021, Saysh not only aims to create a supportive community for women, but it also makes athletic-inspired footwear made for and by women, unlike most brands whose shoes are created based off of men’s feet and footwear. Ms. Felix exemplified that she is about more than just medals – she was running for change, equity, and acceptance for women and girls everywhere. Saysh sought out women-led, women-funded partners for their recent Series A fundraising round, which brought in $8 million and was led by the Gap Inc.-owned Athleta brand.

Off the track, Ms. Felix is a fierce advocate for maternity rights for all women; she gave birth to her daughter Camryn in 2018. In 2019 she wrote an opinion piece for The New York Times that called out Nike, her former sponsor, for not providing guaranteed protections for pregnant athletes and new moms. The public reaction to the piece put pregnancy discrimination in athletics in the spotlight. During the 2020 Olympics, Ms. Felix, alongside her new sponsor Athleta, created the Power of She Fund: Child Care Grant – a fund to assist mom-athletes with childcare while competing at the games.

Ms. Felix serves as a member of the Right To Play board hoping to raise awareness for underserved children in developing regions. 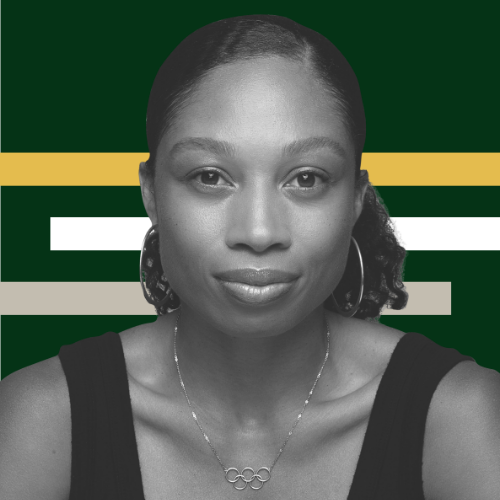